The Brooklyn Shipyard – A Short Overview

If you live in Brooklyn, you may have been to the Brooklyn Navy Yard. If you haven’t been, it’s more than likely that you’ve biked or driven past it without giving it a second thought. The seemingly dull area boarding the East River is a “mission-driven industrial park… home to more than 450 businesses and employing more than 11,000 people…” Today, the Yard has been built out to rejuvenate the middle-class opportunities for New York’s small business owners, creating similar opportunities that it has throughout its history.

The Brooklyn Navy Yard was established in 1801, but at the time it was called the New York Naval Shipyard. From that point forward it would grow to become one of Brooklyn’s most important financial and social assets, particularly during World War II, when about 70,000 people worked there. The Yard was closed as a military installment in 1966 and sold to the city, but in recent years, a surge in population has revived the Brooklyn Navy Yards to their past glory in an updated way.

The Birth of the Yards

In 1801, United States President, John Adams, came out in favor of a strong central government and a capable navy for protecting intercontinental commerce and defending our young country in a rapidly changing world. By the end of his presidency, Adams would move quickly to authorize and establish the first five naval shipyards in the U.S, one of those being the Brooklyn Navy Yard.

Shortly after its founding, in 1833, the first professional naval publication in the U.S, The Naval Magazine, was published at the Yards – with Washington Irving and James Fenimore Cooper acting as frequent contributors. This quarterly periodical would foreshadow the types of media that would come later in the Yard's history.

Interior shot of the Navy Yard Hospital's M.R.S.S Room (Appears to be a Dining Hall)

During the same decade, from 1830 to 1838, the Brooklyn Naval Hospital was built. In 1957, a young naval surgeon who had a deep commitment to improving medical care (who had perfected the manufacture of anesthetic ether) founded his own pharmaceutical company outside of the Yard, which provided the majority of the medical supplies used for the Union Army during the Civil War! This amazing history aside, the hospital ceased operation in the 1970s. It is also notable that some of the first American female nurses and medical students were placed in this hospital around the turn of the 19th Century.

In 1915, the largest ship in the Navy, The USS Arizona, was launched during WWI. At the time, it was one of the Navy’s most heavily armed ships, boasting a dozen 14-inch guns and over 20 5-inch guns – measuring in at an astonishing length of 608 feet, and a displacement of 31,400 tons. During the first war, the Arizona was used merely to monitor the U.S eastern coast. In 1918, it did take a “victory lap” of sorts as it was among the ships that escorted the George Washington, and inside it, President Woodrow Wilson, to the Paris Peace Conference.

While the Arizona did not play any role in this war, on the morning of Sunday, December 7, 1941, a bomb from a Japanese plane ignited the forward ammunition magazine of the Brooklyn-built vessel, sinking it in less than 10 minutes, and taking 1,177 men to their deaths. Today we recognize the tragedy as Pearl Harbor, yet most Brooklynite's don't know the history behind the ship that fell that day – deeply connected to the heart of Brooklyn.

A photo of the entrance circa World War II

With the United States’ entry into the Second World War, the Yard doubled in size when the government annexed the adjacent land of the second-largest produce market in the nation to construct the world’s largest dry docks and crane. Management quickly increased the workforce, causing the

population to explode to

Social shifts included women being hired for the first time at the Yard to work as mechanics and technicians. Think Brooklyn’s role is done yet? Not even close. On September 2, 1945, WWII ended when Japan signed unconditional surrender on the Brooklyn Yard-built USS Missouri, a.k.a., the "Mighty Mo."

Japan Surrenders to the U.S on the USS Missouri

Like many of New York City’s active seaside hubs for commerce, including the South Street Seaport and Chelsea Piers, the Brooklyn Navy yard faced years of obsolescence, especially as the city’s fiscal crisis drove people out of the city, and manufacturing jobs were rapidly transporting overseas. But New York’s economic revival in the past thirty years has brought many of these once forgotten spaces back to life, in a completely different way. 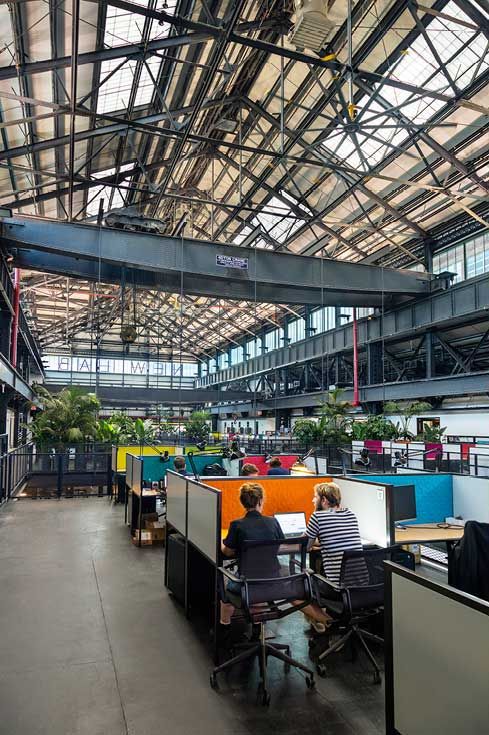 Like the Brooklyn Bridge Park where Longshoremen used to reign, the Brooklyn Navy Yard is used for a myriad of public and private endeavors today. It is a tourism hub, food and drink are made there, along with industrial spaces for welding, woodworking, AI, textiles and fashion. The film industry has also moved into the space, making the Yards an embodiment of the 21st Century economy of entertainment and the resurgence of locally-produced goods.

While it is hard to find specific start and end dates for the Navy Yard’s newsletter, The Shipworker was a pamphlet created for Brooklynites who worked at the yard to keep them up-to-date with all things ship/yard/work/union related. From election results, to opinion pieces, to “In Memoriam”s, to Injury-Tracking stats, this pamphlet acted as the “Facebook Group” for ship workers through the early to mid-20th Century. With a seemingly democratized source of information, one would imagine that the newsletter acted as a voice reflective of the men and women who worked at the Yards.

Yesterday’s News was lucky enough to obtain three copies in near mint condition of The Shipworker from 1959, 1960 (which memorializes 50 men who died in a fire), and 1961. Take a look at the pamphlets in our recent Instagram post. Message us if you’re interested in snatching this rare piece of Brooklyn Navy Yard History, or stop by the shop to take a closer look!

Art Deco & The Past, Present, and Future of Design